troop of special Chinese ducks is waiting to be deployed to neighboring Pakistan to fight a swarm of crop-eating pests that threaten regional food security.

At least 100,000 ducks are expected to be sent to Pakistan as early as the second half of this year to combat a desert locust outbreak, according to Lu Lizhi, a senior researcher with the Zhejiang Academy of Agricultural Sciences. The ducks are “biological weapons” and can be more effective than pesticide, said Lu, who is in charge of the project in tandem with a university in Pakistan.

“One duck is able to eat more than 200 locusts a day,” Lu said in a telephone interview on Thursday, citing results of experiments to test the ducks’ searching and predation capabilities.

A trial will start in China’s western region of Xinjiang later this year before the ducks are sent to Pakistan, Lu said. 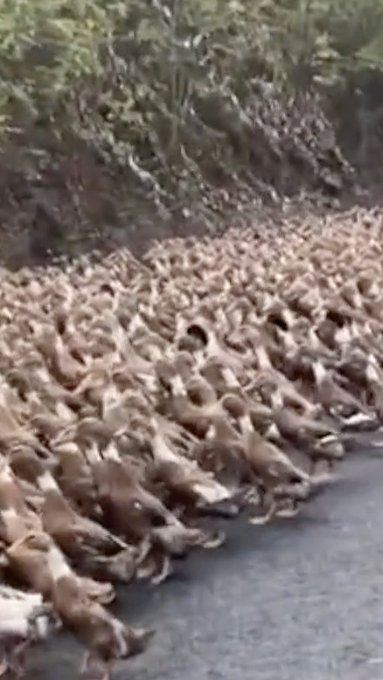 Swarms of desert locusts have been spreading through countries from eastern Africa to South Asia, destroying crops and pastures at a voracious pace. The pest plague, together with unseasonal rain and a scourge of low quality seeds, has hit major crops in Pakistan’s largest producing regions, weighing on its already fragile economy. And it has also migrated into India.
Worst Locust Swarm in Decades Destroy Crops in East Africa
The worst outbreak of desert locusts in Kenya in 70 years has seen hundreds of millions of the bugs swarm into the East African nation from Somalia and Ethiopia.
It will be crucial for China, which shares a land border with Pakistan and India, to prevent an invasion. However, China does have some shield in the form of the Himalaya mountains that stand as a barrier between the Indian subcontinent and the Plateau of Tibet.

A group of Chinese agricultural experts visited Pakistan this week to help control the locust outbreaks as the plague moves eastwards, according to a report posted on the website of China’s consulate-general in Karachi.

To gauge how serious a locust attack can be, look to Africa. The cost of fighting desert locusts in the continent’s east has doubled to $128 million, with more countries being affected each day, the UN’s Food and Agriculture Organization said. The situation remains extremely alarming in the Horn of Africa, while there has been a significant movement of swarms over the Arabian Peninsula that reached both sides of the Persian Gulf, the FAO said in its latest locust watch report.