Nine people were shot dead and up to six more were critically hurt after a neo-Nazi gunman opened fire on two shisha bars last night in the German town of Hanau.

A huge manhunt launched to find shooter ended early this morning with the discovery of two bodies in a house nearby – one of which was said to be the attacker and the other thought to be his mother.

German newspaper Bild revealed that the gunman, who they named as Tobias R, left a letter and video which confessed to the crime and expressed extreme right-wing views.

In his video, the shooter claimed certain people living in Germany must be ‘exterminated as their expulsion can no longer be achieved’. Local reports said Turkish or Kurdish people were among the victims at the bars.

The killer’s father was led away in handcuffs from the apartment where he died but police say he had no involvement in the shootings.

In another video posted online a few days ago, the killer –  in fluent English – delivered a ‘personal message to all Americans’ in which he rambled about devil-worship and child sexual abuse in ‘underground military bases’.

He also claims the US is being run by ‘secret societies’, urging Americans to ‘gather people together and storm these bases’. ‘Fight now’, he says.

Officers sealed off and searched the suspected gunman’s apartment in Hanau’s Kesselstadt district, near the scene of one of the shootings.

German media reported that the killer was in possession of a hunting licence. It is not yet clear what kind of weapon he used for the massacre.

‘Thoughts this morning are with the people of Hanau, in whose midst this terrible crime was committed,’ German Chancellor Angela Merkel’s spokesman said on Twitter.

‘Deep sympathy for the affected families, who are grieving for their dead,’ the spokesman, Steffen Seibert, said. ‘We hope with those wounded that they will soon recover.’

Konstantin von Notz, a German politician who sits on the panel which oversees Germany’s intelligence services, added: ‘I am deeply affected by the horrific terrorist attack in Hanau. My thoughts are with the victims and injuries and their relatives.

‘My solidarity is with the people in Hanau, especially with the citizens with a history of migration. The background to the crime and the perpetrator must now be carefully investigated. It is the hour of the investigators.

‘But it is also clear that the agitation against migrants, the use of anti-Semitic narratives and the contempt for the state and the media, as has been systematically practiced by the AfD for years, has fatal consequences.

‘This poisoned social climate is the breeding ground for the right-wing terrorist structures, murdering individuals and terrorist attacks such as those in Halle, Kassel and now Hanau.’

Germany has been at the centre of a resurgence in far-right politics across Europe in recent years, which has seen the AfD seize a record number of seats in parliament, a far-right attack on a synagogue and a politician murdered by a right-wing extremist suspect with.

The swing towards right-wing ideology began as a backlash to the 2015 migrant crisis, when Chancellor Angela Merkel threw open Germany’s borders to boat-loads migrants crossing the Mediterranean – infamously declaring ‘we can do it’.

An estimated 1million migrants arrived in Germany that year alone followed by headline-grabbing stories of sexual assaults, most infamously on New Year’s Eve 2015/16 when more than 1,000 women in 12 cities including Cologne claimed to have been sexually assaulted, mostly by men with a non-European background. 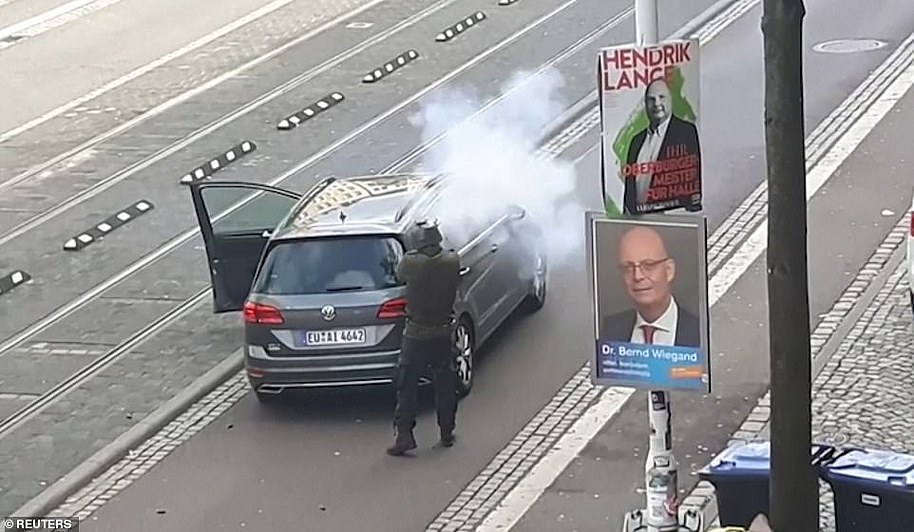 Earlier Thursday, police said a dark vehicle was seen leaving the location of the first attack and another shooting was reported at a scene about one-and-a-half miles away.

Police officers swarmed central Hanau, cordoning off the area of one of the shootings as a helicopter hovered overhead. A car covered in thermal foil also could be seen, with shattered glass next to it. Forensic experts in white overalls collected evidence.

‘This was a terrible evening that will certainly occupy us for a long, long time and we will remember with sadness,’ Hanau Mayor Claus Kaminsky told the Bild newspaper. Lawmaker Katja Leikert,a member of Merkel’s centre-right party who represents Hanau in the German parliament, tweeted that it was ‘a real horror scenario for us all.’

Hanau is about 12 miles east of Frankfurt. It has about 100,000 inhabitants and is in Hesse state.

An attacker is said to have rung the bell at the Midnight shisha lounge and sprayed bullets at people inside when he was let in. He then fled the scene in a dark-coloured car before gunfire rang out at a second bar, Arena, less han two miles away.

At the Midnight bar, one witness told German newspaper Bild: ‘Someone with a gun came in and shot people.’ Other witnesses told of eight or nine shots ringing out just after 10pm local time with one man seen lying prone on the ground after the shooting.

A silver Mercedes covered in thermal foil blankets with shattered glass next to it could be seen standing outside Midnight bar after the killings, behind a police cordon. 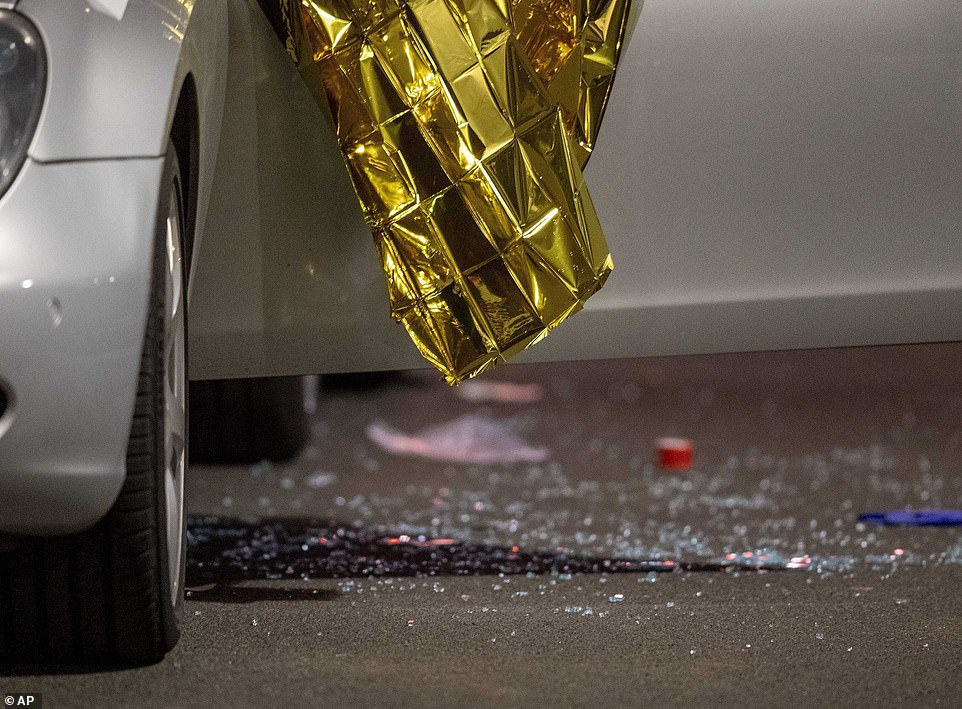 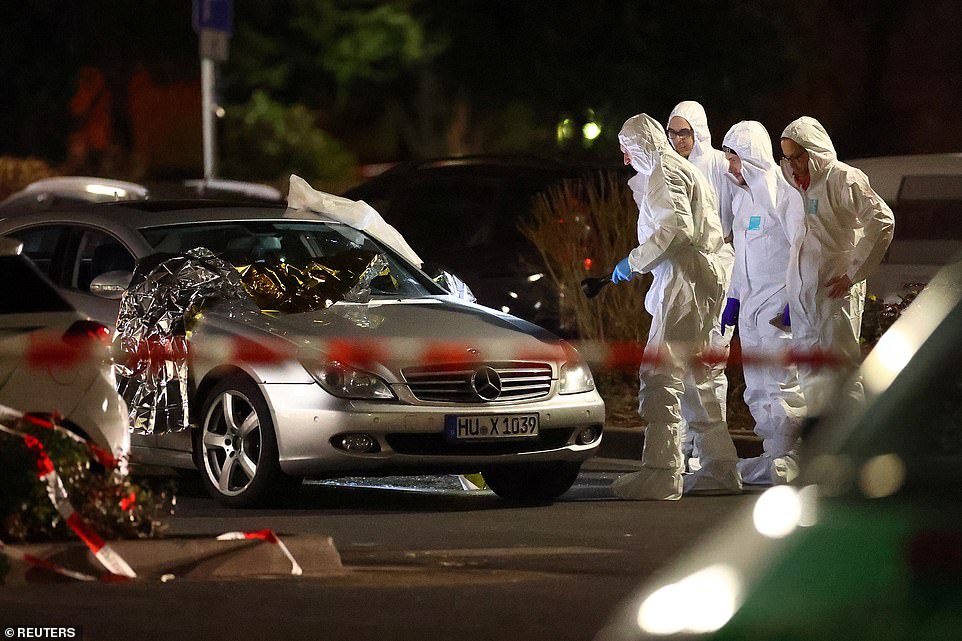 Agbo jalingo speaks to Press after release from detention [video]